How to Prevent Unconscious Bias from Derailing Your Career

I’d like to share a guest blog post with you today by Andie Kramer on a very important topic: women and the unconscious bias they face in the workplace, and what they can do about it. It is based on the new book Breaking Through Bias: Communication Techniques for Women to Succeed at Work, by Andrea S. Kramer and Alton B. Harris. 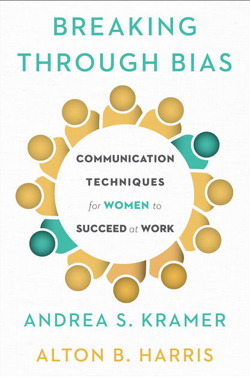 A major career move—advancing to a new position in your current organization, moving to a new one, or restarting your career after a break—can be difficult in the best of circumstances. But when the people controlling your ability to make such a move, that is your career gatekeepers, are biased against you, a major move can become impossible. Biases are of various sorts. Conscious biases—outspoken misogyny, racism, or anti-Semitism—are rare in today’s business environment. Unconscious or implicit biases, however, are anything but rare.

All of us on occasion use stereotypes in deciding what sort of person will be best at particular sorts of tasks. We might, for example, simply because of the stereotypes we have about particular sorts of people hire a man rather than a woman, promote a white person rather than a black person, or give a plum assignment to a young person rather than an older one. In doing so, we probably would not even be aware we were making biased, discriminatory decisions, or realize those decisions were directly contrary to our conscious, declared beliefs.

In what follows, we explain how stereotypes foster unconscious biases and how these biases limit career opportunities; we then offer some practical, effective techniques you can use to avoid or overcome the implicit biases you face in your career.

We form stereotypes at a very young age. We ascribe to people who share a single characteristic—such as sex, race, ethnicity, or age—a host of other characteristics that can be positive—all Asians are good at math—or negative— all women are bad at math. But in either case, stereotypes are problematic because they strip a person of uniqueness. They ascribe characteristics to a person not because of actual behavior, accomplishments, and potential, but because of a social construct, an in-group/out-group prejudice, or a lazy way of deciding what a person is like. Stereotypes distort reality and create biases.

We commonly think that a woman—simply because she is a woman—is (and ought to be) warm, pleasant, caring, gentle, modest, sensitive, and affectionate (characteristics frequently called communal). On the other hand, we commonly think a man—simply because he is a man—is (and ought to be) strong, forceful, aggressive, competent, competitive, and independent (characteristics frequently called agentic).

A career gatekeeper who sees the world through these gender stereotypes will make decisions based on an unconscious expectation (at least at an initial meeting) that a woman will not be as forceful, competent, suited for challenging assignments, or capable of high-pressure, competitive leadership tasks as a comparably qualified man. Thus, traditional gender stereotypes foster a negative bias: a woman, simply because she is a woman, is not as capable of successful leadership as a man.

Because women face a negative bias if they conform to traditional gender stereotypes and an agentic bias if they violate them, women often feel they are in a no-win situation, unable to advance regardless of what they do. As a result, they can become frustrated with their careers, cynical about their advancement opportunities, and unwilling to continue to make the effort needed to get ahead.

The pervasive nature of such frustration is well illustrated by a recent survey by Bain and Company. Bain found that when women start their careers at large organizations, they are just as ambitious as men. But after about two years, the percentage of women aiming for a top position has dropped by about 60%, while the percentage of men with similarly high ambitions has remained the same. Contrary to conventional wisdom, marital status and parental responsibilities are not significant predictors of whether a woman will aspire to a top management position. Most discouraging, 70% of female middle managers and 75% of female senior managers believe women do not have an opportunity to advance in their organizations on terms comparable to men.

The Bain survey makes clear that after being in the workplace for several years, something happens that saps women’s ambition and undermines their belief in their ability to achieve meaningful career success. That something, in our view, is unquestionably gender bias. Women’s ideas are disregarded, they are excluded from networking and skill-building opportunities, and they experience discriminatory decisions about who is assigned to important projects, who receives valuable sponsorship, who gets listened to, and who is promoted.

Before we discuss what women can do to avoid or overcome this sort of gender discrimination, we want to look briefly at how gender stereotypes can also negatively affect men’s careers.

When men refuse to conform to traditional male stereotypes they too face gender bias. A man will inevitably be criticized about his lack of commitment to his career if he assumes primary responsibility for his children, demands a flexible work schedule, or refuses to accept assignments that take him away from his family. Thus, a man who, for whatever reason, rejects the demand for constant “face time” and refuses to be available 24/7 faces negative career and social costs because of the gender bias against “unmanly men.”

Obviously, our workplaces should be more gender neutral. Women who want robust careers should be supported, not attacked, and men who want to assume more domestic responsibilities should be respected, not depreciated. But achievement of such a blessed state of affairs will require enormous changes in workplace culture and social attitudes—changes we do not expect to see any time soon. This means that the real question is not whether our workplaces should change—of course, they should—but what women and men can do now to avoid or overcome pervasive discriminatory gender biases.

Women often suffer career penalties if their career gatekeepers see them as communal—thus not capable of leadership—or as agentic—thus unpleasant and unlikable. We call this double bind the Goldilocks Dilemma: a woman is “too soft” if she is seen as communal and “too hard” if she is seen as agentic. The trick for a woman, therefore, is to be seen as “just right,” and this depends on her ability to combine both agentic and communal behaviors in the right proportions at the right times. We call such purposeful mixing of “hard” and “soft” behaviors “attuned gender communication.”

For a successful career, a woman must be able to present her ideas forcefully, lead with decisiveness, and stand her ground when criticized. But unless she can mix this sort of agentic behavior with communal characteristics that convey her openness to other people’s ideas, her inclusiveness and relatability, and her social sensitivity, she is likely to be penalized, not rewarded. A woman should never be hesitant to speak up, assert her point of view, or take charge, but when she does, she needs to project personal engagement with her audience, a genuine concern for the welfare of her organization and the people in it, and a keen sense of fair play. In other words, unlike a comparably situated man, a woman needs to pair behavior that shows her competence, confidence, and a competitive appetite with behavior that projects warmth, inclusiveness, and likability.

A man who wants to play a meaningful role in the life of his family must decide if he also wants a demanding career. If he doesn’t, then the consequences of the bias against “unmanly men” are essentially irrelevant. But if he wants a robust career, he must find a way to overcome this bias, and this will require him to do at least two things.

First, he must take concrete steps that will allow him to have a full domestic life while pursuing career advancement. He will need to negotiate firm arrival and departure times, a flexible work schedule, or an opportunity to work from home. Such arrangements can be difficult, but not impossible, to obtain. And they are likely to come with costs: less rapid advancement opportunities, lower financial rewards, and fewer challenging projects than he might otherwise be qualified for. But if he truly owns his choice to equally value career and family, he will be able to live with the consequences if that choice with grace and good humor.

Second, consistent with the demands of his domestic responsibilities, he must maximize the visibility of his career commitment. This means he must devote much of his time when he is not with his family to his career. In other words, if it is not a family matter, he should be involved with his career, and if it is not a career matter, he should be involved with his family. To do this, he will need to forego many other aspirations—an active social life, non-business travel, training for a marathon, civic engagement, university extension courses, a book project, and much else. To achieve career success and real domestic engagement, a man must make clear that he is fully committed to both. Women with children and careers have been doing this for quite some time, and if a woman can do it, a man ought to be able to do so too.

Our discussion has focused for the most part on gender bias. But other implicit biases—race, ethnicity, age, religion, education, ancestry, or whatever—can also derail a career. The techniques that are most effective in avoiding or overcoming these biases may vary slightly, but they should all be approached in basically the same way: become aware of the stereotypes that are driving the bias, identify your behaviors that play into and obviate the consequences of this bias, and learn to manage the impressions you make so you confound or overcome these stereotypes rather than feed them.