The Mystery of the Screaming Partner

As an executive coach, I work with many people who are causing problems in the workplace. They are not getting along well with others, so they are sent to work with me to try to fix the problem. 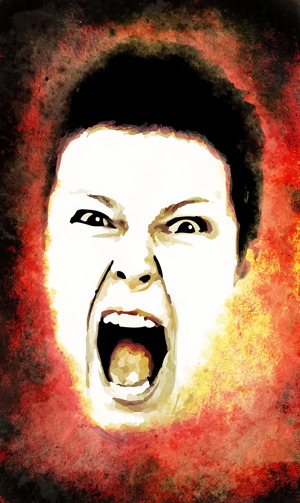 When people in high places have personal problems that stir up issues in the workplace, the effect can reverberate. I have often found that the source of the problem is something deeply personal that gets imported and played out in the work setting.

A number of years ago I worked with a partner sent to me by her law firm. She was valuable to the firm because she was the head of a practice area that the firm was trying to expand, and she had a large number of loyal clients. The firm wanted to keep her on board as a partner, but associates and staff who worked with her complained that she had a dysfunctional management style. She was disorganized, and often gave associates work to do at the last minute on Fridays, which meant that they could not get to the Cubs game or the wedding that they had planned. She had a “hair on fire” culture in her practice group, and she screamed at her associates and was annoyed and irritable with them.

Associates complained that she gave them negative, unfair reviews which other partners did not. Many associates asked not to work with her or asked to be assigned to a different practice group. When this partner threw a book at an associate, narrowly missing him, it was the last straw. The human resources/professional development team sent her to work with me.

Why does someone behave this way? Whenever I begin working with anyone in executive coaching, I begin with a mystery. What is going on that prompted this behavior? What are the contributing factors? What is this person thinking? Why is this happening now?

When I first met with this partner she was angry and annoyed about being sent to work with me on her “remedial people skills.” She was thinking about quitting and taking her clients her to another firm. To her credit, she was willing to be open to the coaching process. I was able to create a relationship with her by drawing her out, hearing about her issues and concerns, and affirming her.

I learned that this partner lived to work. She never married and never had children. Her clients were incredibly important to her and she was devoted to them. Work gave her a sense of purpose and self-worth. Working on the weekends and late at night actually helped her to fill her life.

Her associates, typically Millennials, had a different perspective. They wanted to work hard during the week but have fun on the weekends with their friends and family. She had no respect for that; she had always put work first. Also, her most reliable associate was a woman who had just gotten married and was having a problem pregnancy that caused her to cut back her hours.

However, to have a well-run, supportive team, this partner needed her associates to want to work with her and for her. It was in her self-interest to make some alterations in the way she worked with her staff. She agreed with that assessment. I told her it was important for us to really understand where her anger was coming from.

We talked about some of her deeper needs and concerns. She was worried and anxious about losing her clients. Some of her clients were very demanding. To please them, she would try to get them answers to their questions as fast as possible so that they would see how responsive she was. That resulted in last minute assignments to her associates.

We talked about her annoyance with Millennials, who she thought put fun before work. She confessed that she wasn’t just annoyed, she was jealous of them. They had a life outside of work. She had put her work life front and center and why shouldn’t they do the same?

When it came to the associate with the problem pregnancy she confessed that she felt abandoned by this associate. She had not had children but there was a part of her that felt sad about that. To her credit she was able to talk about it with touching honesty.

She felt a lot of contradictory things: anger that she was being “abandoned” by the associates, jealousy because they had fuller lives than she did, pride that she was a better worker than they were, worry and fear that her clients would leave her if she did not respond to their needs immediately, and irritation about having been asked to behave differently, not to mention upset about having so many feelings roiling her psychologically.

It all bubbled over the day she threw the book. That day, she learned an associate would not be available to help her over the weekend, and the pregnant female associate asked to be reduced to part-time work status. The partner felt abandoned by her team. While not excusing what she did, it helped us to understand why she did it. It helped to solve the mystery.

We set some goals, and as we met over time, she worked to implement them. Some were very simple. I encouraged her to talk with her associates about how their contribution mattered. I encouraged her to thank her associates, especially if they worked over the weekend or late at night. When it came to those weekend assignments, I worked with her on a number of organizational strategies that allowed her to pace the work she gave to her team and avoid most of the late Friday afternoon assignments. We talked about how realistic or unrealistic it was to worry about losing her clients if they did not get a rapid response. And she agreed the concern was more of a worry and not a reality. We worked on a strategy to deal with her anxiety using a cognitive behavioral therapy (CBT) intervention: identify the negative thought, challenge the negative thought, and replace the negative thought. And then we worked on a way to talk with her clients to reassure them if the response was a little less rapid.

When it came to the problem of feeling abandoned, that was more of a psychological issue that had deeper roots. If I had been her therapist, we would have explored that deeper psychological issue. As her coach I focused on helping her to have more of a social life on the weekend so that she too could enjoy a life outside of work and feel less jealous of her associates.

To her credit, this partner was willing to share some of her deeper feelings with me and was able to be open to suggestions in the interest of developing a more supportive team at work, which she was able to do.

Often the people at work who are upset and difficult to work with have deeper personal issues that are not known to others in the workplace.  Even if you do not know why someone is hard to work with, it can help to know that that person’s inner demons make their own lives harder, not just yours.