Every workplace has people who can help you get past the castle gates and get you recognized by a hiring manager. 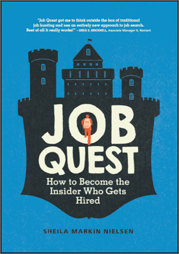 Here’s a story from my practice; it’s an example of using rapid relationship and trust building to find gatekeepers to promote a job quest. It comes from a client who was a litigation associate at a large firm.

He had graduated from a top-tier law school with excellent grades and had been an editor for his law school’s law review. After graduation, he went to a large firm where he was assigned to the litigation group. He was expected to be an aggressive and confrontational lawyer, but he was more of a reasonable, thoughtful person by nature. Appellate work, with its emphasis on research, writing, and oral argument, was far more enjoyable for him.

In our work together, it became clear that a career move into a position with the federal government might be a good strategic and personal career decision for him. He looked at usajobs.gov, the website for federal employment, and learned of a number of job prospects that fit with his interests in appellate-based work. He prepared his applications.

He then launched a concurrent search for classmates who were working for the federal government in the Justice Department. One day while he was looking at one of the websites for one of the federal agencies he was interested in, he thought he saw in the background of one of the workplace photos the somewhat blurred image of a classmate from law school. He contacted his friend by e-mail and, sure enough, his friend was working at that agency. When he told this friend about his interest in a job at the same agency, his friend told him to shoot his résumé over and he would hand deliver it to the person in charge of hiring. He did that, and within about two weeks he was asked to come to Washington, DC, for an interview. He was hired by the agency a few weeks later and was very happy with that decision.

You could say it was lucky that he saw his friend in the photo, but it is more accurate to say that he had a hand in creating his good luck. He did that by actively hunting for people he knew in the village behind the castle and maximizing the chance when he did find someone he recognized. In addition, since he was also a bright, personable guy who had a good reputation in law school, he was able to get an endorsement from this friend who was connected to the keeper of the castle keys and also able to bypass the dragon.