Will Analytic Behavioral Testing Prevent You From Your Dream Job?

Last week’s lead article in Time magazine is “How High is Your XQ? Your Next Job Might Depend on It.” Some workplaces are giving job applicants a new kind of test to see if the applicant has the right personality for the job. Matching up personality with career direction and job is not a bad idea, but the way to do that is not by using “people analytics,” at least not the analytics cited in the Time article. 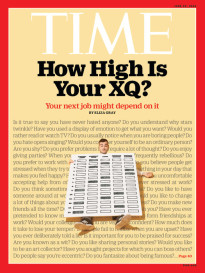 “People analytics” purports to create an algorithm that correlates a candidate’s answers on a test with responses given by successful workers and assumes that if there is such a correlation, the new hire will also be successful. The Time magazine article goes on to cite some of the questions that applicants have to answer in a written test, questions such as, “I never get angry” or “sometimes I’m not sure what I believe” or “when I was young, there were times when I felt like leaving home.” The actual answers to these questions are not what matters so much as the correlation between the answers given by the applicant and the answers given by workers who excel on the job. The pattern of answers that emerges is supposed to provide a measure of the person’s deeper, behavioral self. However, if these are in fact the kinds of questions being asked to divine a pattern that reveals a person’s behavioral self, I think they are flawed. According to the Time article the applicant is required to give a true or false response, but most people could answer these “true sometimes and false sometimes.” In short, these questions call for nuanced answers but the applicant is allowed to answer only true or false. The applicant is left taking a stab at an answer but how much weight should be given to that answer? I would argue, not much. The Time magazine article gives the reader a sample test to take and after you take it you add up the numbers, giving yourself a point every time you answer true to items 1,3,6,7, or 8, and giving yourself a point every time you answer false to the remaining items.

These questions remind me of the personality quizzes you used to find in most women’s magazines. After answering a series of true or false questions you were supposed to classify yourself using a scale: 0-3 means you are an overly kind person, 3-6 means you are kind but also strong willed, 7-10 means you are a mean girl, for example. Good grief! Are job applicants now going to be subjected to this kind of testing that might deprive them of jobs where they could be real contributors?

When I was in graduate school I was working with high school students in an after-school program who were taking vocational tests to figure out their career direction. I decided to take these tests too because I could take them without being charged the usual fee. What did I have to lose? At that point I was in a master’s program for social work, but in my heart of hearts I really wanted to be a criminal prosecutor! What would the tests predict for me? My test results came back in the mail and I still remember opening the letter nervously. I had tested well for interior design and psychology. That was probably a good call. But the field of law was not even on the list of careers I should consider. I was disappointed to say the least and for a time it discouraged me from applying to law school. But eventually I did apply and I went on to become a criminal prosecutor, first in state court and then in federal court. I loved being a prosecutor and did well at it. As an assistant U.S. attorney I had about a dozen jury trials and never lost one.

Did I have the perfect personality to be a criminal prosecutor? Probably not. I am not super competitive and don’t enjoy playing hard ball, although I can do it. I can see both sides of an argument. But I think that that made me a more formidable opponent. I could anticipate the defense because I understood the other side of the argument. Was I super confident and self-assured? Nope. But being less confident caused me to work harder, prep harder and be more organized than the other guy and that probably led to more victories. Did I have a steel trap memory for case law? Not at all. Some of my colleagues like Scott Turow could remember not only applicable case law, but could recall on what page a particular quote could be found or could quote applicable case holdings verbatim. I was in awe of anyone who could do that. I didn’t even like doing legal research. But when it came to understanding the way to build a case by developing the story and bringing the jury along, and understanding how a juror would be likely to feel and think about a witnesses’ credibility or about motivation, I really got that.

If the US Attorney’s Office had insisted on one of these tests, with greater validity than the disappointing one in the Time magazine article, I probably would not have made the cut. But if certain behavioral traits correlated with other litigators were not my strength, other valuable behavioral traits for being a successful prosecutor were. And, above all, I had a lot of motivation to do this job and do it well. And that’s where I think these tests are problematic.

Ever since I was a little kid watching my uncle, Lowell Myers, in court, I wanted to become a litigator. My uncle was the first deaf lawyer to work as a litigator in court. My mother went to court with him as his interpreter. I must have been about 5 or 6 years old when I watched them in the courtroom as Lowell was trying a case or arguing a motion. I wanted to do that someday too. It became my dream to someday be a federal prosecutor.

Motivation and will go a long way to getting a person to build up less developed behavioral traits. And part of the beauty of a career is that it can be a vehicle for personal growth and development, not just in terms of hard skills but also in terms of such things as leadership, personal power, inner strength, self-esteem, and much more. People grow as people when they are challenged on a job. A job can be an opportunity to get closer to being all that you could be.

I went into the US Attorney’s Office a fairly naïve young woman with excitement and motivation for the job and when I left I was stronger, more confident, and far more able to voice my thoughts and beliefs. As a career counselor I see many people in my practice who may not be perfect behavioral specimens for a particular job but who do very well once they are on the job. In addition they add a perspective and viewpoint that enriches the workplace and can expand their colleagues’ minds.

I would hate to see that lost.